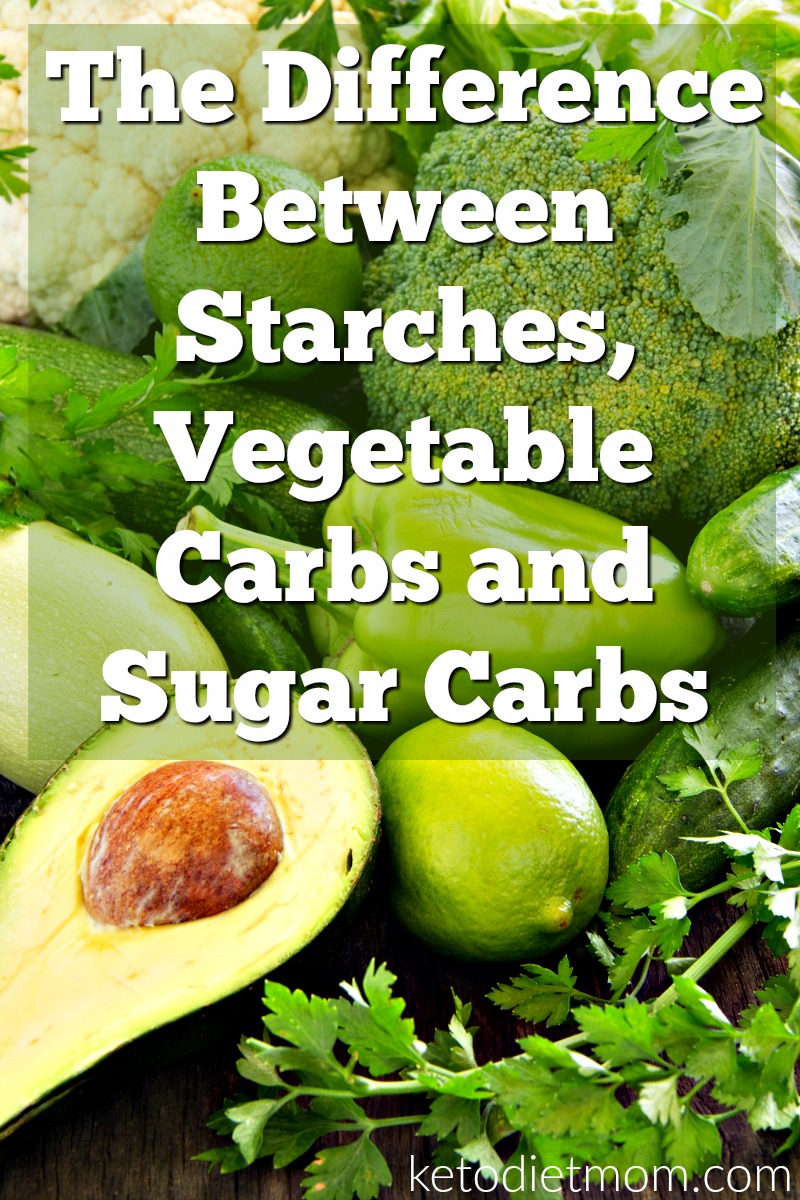 Are you considering a keto diet, or do you just want to learn more about the different types of carbs like vegetable carbs, sugar carbs and starches? Either way, this article on carb types is for you.

A lot of people think all carbohydrates are bad. However, when it comes to carbs, they’re not all created equal. In fact, some are even super nutritious and good for you. These foods don’t have the high carb density of starchy or sugary fruits, veggies and grains.

Choosing the right vegetables super important if you’re following a keto diet or low carb lifestyle. The ketogenic diet is focused on consuming fewer than 20 carbs per day. Most of these carbohydrates are consumed from non-starchy vegetables.

With the low carbohydrate level, people also consume a moderate amount of protein and a high fat intake, especially focused on healthy fats. This type of diet triggers a metabolic process that’s called ketosis. Through this process, the body starts to burn stored fat for energy instead of carbs since you’re not eating many of them.

But why is everyone worried about eating the wrong vegetables on the ketogenic diet? Haven’t we been told that all veggies are good for you?

While that is true, not all vegetables can help you achieve your goal of staying in ketosis. You’ll need to know which ones have a higher glycemic index.

Which Veggies Should You Be Reaching For?

This list is your low carb veggies, the ones you want to reach for, along with their carb count. You’ll want to avoid starchy grains and veggies such as corn, peas and potatoes. These foods have a higher glycemic index and can throw your body out of ketosis if you consume too much.

Are Vegetable Carbs Better Than Starch Based Or Sugar Carbohydrates?

I’m so glad you asked! Yes, vegetable carbohydrates are better as they offer more health benefits than empty carbs.

Do you know primary factor in a food’s ability to affect your blood sugar levels? It’s called the glycemic index (GI) score.

The veggies listed above all have GI score of less than 20, which means that their effect on your blood glucose levels is super low (the lower the GI, the less significant the effect on blood sugar or insulin trigger ability).

On a keto diet plan, the goal is always to put the body into ketosis, or the metabolic state of burning fat for energy instead of dietary carbs. It’s important to understand that insulin puts a restrictive effect on ketosis if it becomes elevated too often.

This is the reason why foods food that have a high GI and trigger an insulin release are extremely limited on low carb eating plans. It’s important to choose low carb vegetables as the main source of carbs in your keto diet plan.

Insulin, often called the “storage” hormone, doesn’t like to have your body’s stores depleted. So, it will attempt to hoard as many nutrients as it can. Thus, lipolysis (the pre-cursor to ketosis) is also shut down, and the body’s attempt to lose weight likewise is halted. So don’t trigger that insulin!

Are Starch Carbohydrates And Sugar Carbs Totally Off Limits?

In an ideal world, every person in the world would take action to eliminated sugary and starchy foods from their diets, even natural ones. This is because they induce a constant state of hyper-insulinemia, and chronically high blood sugar levels.

By now you’ve most likely seen, or even experienced the dangers of high blood sugar. Everything from diabetes to the associated disorders of the heart to damage to blood vessel walls, nerve damage and much, much more can be caused by high blood sugar levels!

When it comes to the average person, refined sugar and sugary foods do nothing for them except for increase blood sugar levels, which then turns into fat. The only exception to this generalization would be an athlete or bodybuilder that quickly burns off all ingested sugars during their intense workouts.

One question we see frequently is whether whole wheat and high fiber cereals can be compliant with a keto lifestyle. If you’re obese or overweight, you’ll want to stay far, far away.

In fact, many experts agree that while whole grains may have more nutrients, like fiber, than their white processed counterparts, they can still be significant insulin triggers. Therefore, they are not compatible with ketosis or long term weight loss goals.

So stay away from oats, whole wheat bread, brown rice and the rest of the whole grains. Don’t let them prevent you from entering a state of ketosis and staying there.

Non-starchy veggies should be your go to vegetables if you’re truly serious about following a keto or low carb lifestyle.

What are your favorite veggies to eat on the keto diet?